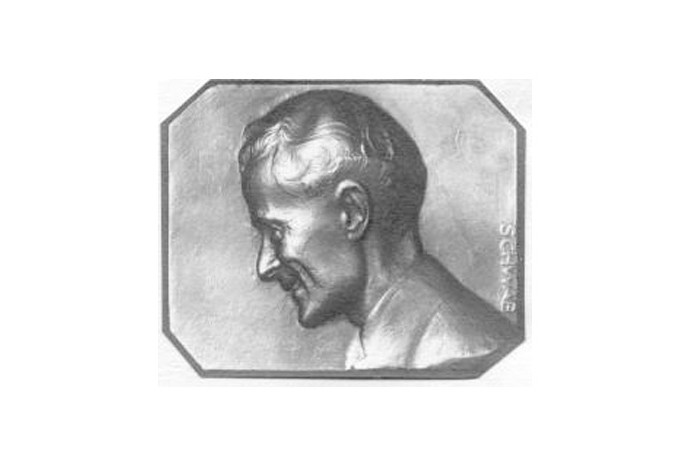 The works of André SCHWAB took on many various aspects, and were made for many different purposes.

He executed a series of portraits of his peers, endeavouring to render them as true to life as possible, but for the effigies of long departed great artist, like Leonardo da Vinci ort Michelangelo, he adopted a more disengaged style, and interpreted it originally. He also represented allegories, like animals, pastoral scenes, landscapes.

Some of his medals and tablets are made to glorify sports and physical exercise, others to commemorate some exhibition dates or the vocation of certain companies. In these works, Schwab was able to find subjects logically and directly related to the each particular piece.

Schwab had more than one source of inspiration. If every day life offered him motifs which he gladly took up, he sometimes borrowed master pieces from past centuries, which he either accurately reproduced in small low relief, or modified to suit a more modern inclination.

Despite the great diversity of subjects he has treated, he has proved himself talented, restrained and tasteful. His medals, whether little or highly accomplished, are always well balanced, firmly built, and have a certain sculptural feel. He even took landscapes simply as pretexts for setting levels and volumes, much more so than seeking colour. In this respect, his “Côte de Penmarc’h” is a typical example.

Amongst all of Schwab’s works, some are more attractive than others; the ones where he took Brittany, and more particularly its dwellers, as his subject.

He lived among these individuals and sketched snapshots of their lives. Coquettish blooming young girls, elderly figures shrunken and wrinkled by the years, all of whom clearly display the attributes of their race. What makes Schawb’s work stand out from others of the same genre, is that not only the clothes are Breton, but also, and most importantly, their physical types. But the artist hasn’t only paid attention to appearance, an already very typical attribute as it is, he also tried to capture the Bretons’ individuality, and one must admit that this goal has been fully and brilliantly met.

From time to time, he catches his models in casual attitudes, thus creating his "Commères" (gossipers) which seem to have so much tittle-tattle to tell each other, or his sitting peasant women, looking so silent and lost in some daydream or other…

At other times, he fancies representing only a face, a sort of portrait study, and this face, such a truthful mask, is like a personification of the Breton type. To reach such perfection, the artist has to be a great observer as well as a psychologist. Schwab has proved himself capable of being both.  he has also shown that he knows his trade well, and that no obstacle could possibly stop him. His full-frontal faces are the most eloquent tokens of this. Among all the medal-makers who have taken inspiration from Brittany, André Schwab was probably the one who best understood the "Breton spirit".