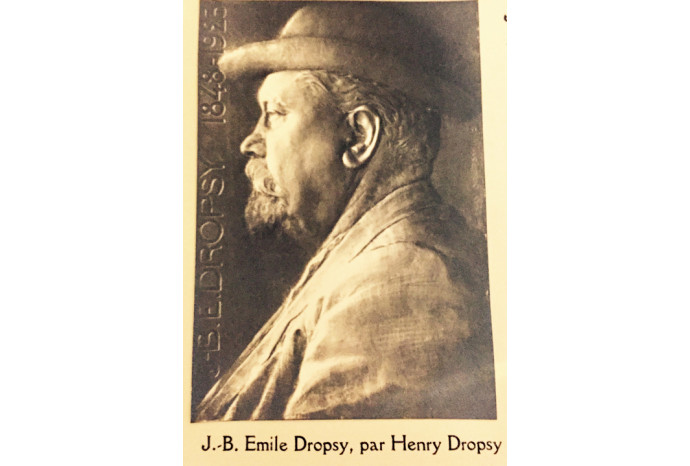 J-B Emile DROSPY broke away from the family tradition which seemed to want all the Drospy’s to become marble sculptors. Indeed, his father and grandfather both practiced this trade. In the 18th century, the Drospy Marble sculptiors were numerous, some even worked at the royal court, and one of them calling himself master marble sculptor, became the director of the Saint Luc Academy.

Who were these figures who influenced Emile Drospy? Only a thorough study of special archives, if they still exist, could answer that.

Thus, Emile Drospy anbandonned his fathers’ trade, and began his apprenticeship as a metal engraver with Lemoine, set up in Paris on the quai de Jemmapes, while attending drawing lessons. Having become an excellent engraver, he set up his own business. Then, at the age of thirty, when one finishes studying if one has not done so long ago, he eagerly started modelling medals under Ferdinand Levillain’s direction. As he had to make a living and circumstances allowed him to sell religious medals, he devoted many long years to this genre, trying to make them look polished and agreeable, according to the buying public’s taste.

Nevertheless, in his spare time and working for his own pleasure, he produced works which were displayed at the “Salon des Artistes Français” around 1900, and earned him a third, then a second medal. It is in these works that the artists put the best of himself.

He took up some religious subjects, but only to turn them into true works of art, and not longer mere “souvenir” medals. Nature was also one of his favourite subjects. Amidst a landscape, in a farmhouse interior, on a coast of Brittany, he set human figures, domesticated animals.

He treats his medals with a certain fullness, and one cannot help being surprised that the author was formerly a craftsmen used to the fine work of engraving. Nothing recalls the meticulousness of engraving, on the contrary, his vision is a large one, his touch free and broad.

Even though he had the skills which allowed him to express himself entirely and flawlessly, Emile Drospy was never tempted to boast on his purely technical qualities. He never became the slave of his knowledge. And this was lucky. He religiously inspired works still bear a certain simplicity, an ingenuity, which can not easily be found in other artists’ works of this genre. His landscapes show nature as rural and genuine, represented with sincerity and truthfulness. His human figures seem very natural.

He didn’t state any theory; he had no principle, but gave way to his sensitivity, and was only concerned with being true. Far from controlling his emotions, he let them take over his being, and that is why his medals are so moving.

Mostly unknown during his lifetime, Emile Drospy appears today as an extremely appealing artist. He may be considered as the truest of religious medal makers, and the sincere of landscapers.