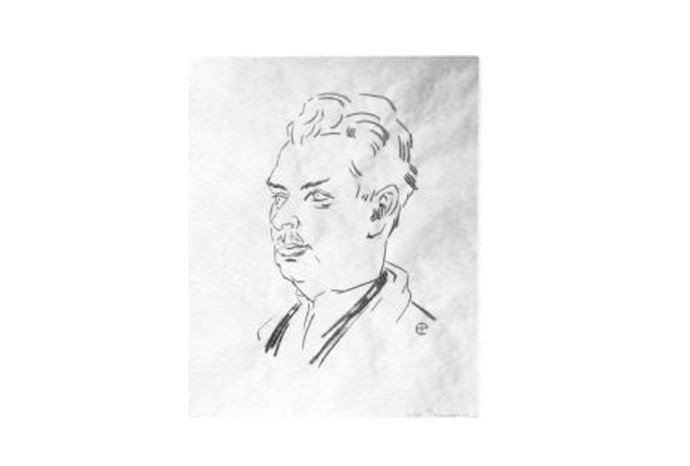 Maurice DELANNOY came neither from a school, nor a private workshop; He taught himself, having only his perseverance and energy but also, one must admit, an unshakable self-esteem.

At a very young age, he would spend his free time making medals. Already driven by the noble ambition of becoming a unique being, he drew all his subjects from his own imagination; even refusing to copy the works of old masters to learn the basics of his favourite art.

His work had already been exhibited at the “Salon des Artistes Français”, which in many ways stood as the meeting place of all medal makers, when the war broke out.

Taken prisoner by the Germans, he spent two years living in a swampy and desolate region, bound on all sides by the horizon.

It was in the middle of this dire, simple nature, that his artistic ideas were forged.

From then on, his style has been prevailed by sobriety and harmony of lines. From then on, the artist has always endeavoured to progress in that direction, to finally be able today to reach his master pieces.

The moulding process, which he practised for a very long period, did not allow him to express himself as accurately as he would have wished, so he started carving directly into plaster. With this process, he had found a way to give his small scale low-relief a sculptural character, an typically architectural decorative feel.

For Delannoy, the art of the medal consists in setting a composition of low relief on a flat background, according to a pre-determined surface. If the surface is circular, the composition will be made of curved lines, adhering to the general shape of the medal, as in: The Family, The Dancer… If it’s an angular surface, like a rectangle, the composition will be predominantly made of straight lines (vertical and horizontal), as in: Delicacy, Charmer…

The contours do not blend into one another into more or less marked relief, but tend towards a unique and general level. They never give the impression of high relief, let aside free standing sculpture. The contours are neatly cut-out and cast shadows, which stand in as the contours of the design.

In his most recent medals, Delannoy has always avoided puncturing his relief; In the case of a human figure for instance, the eyes, the mouth are plainly represented, even sometimes hardly outlined. This way he manages to obtain grey hues instead of black. He treats relief in terms of masses, focusing on volumes and knowingly disregarding details. The mass is determined according to the surface of the medal or tablet, to create a feel of balance and substance. These qualities of balance and substance are worth much more to Delannoy than the subject itself which only comes in second place. Maurice Delannoy’s works are not merely the result of theories led by strong willpower. Not only do they provide great enjoyment to our intellect, but they impress our senses with a very passionate and obvious love of nature, highlighted by a certain sensuality.

Here is how the artist proceeds. After having imagined a composition on the top of his head, he takes a live model observation drawing which he uses as documentation, he then starts to hollow out the plaster; finally, he brings the final touches, still keeping the drawing before him.

Delannoy’s great achievement is that to be “of his time”, of our time. His medals reflect the same aspirations, the same aesthetic understanding which can be found in other truly modern sculptors and architects. In this way, his work stands as a milestone in the evolution of contemporary medal making. Maurice Delannoy got a distinction in 1921, at the age of 36, followed by a bronze medal in 1923 and a silver medal in 1926. No doubt his stubborn efforts and vigorous talent will soon be crowned by yet a third award.