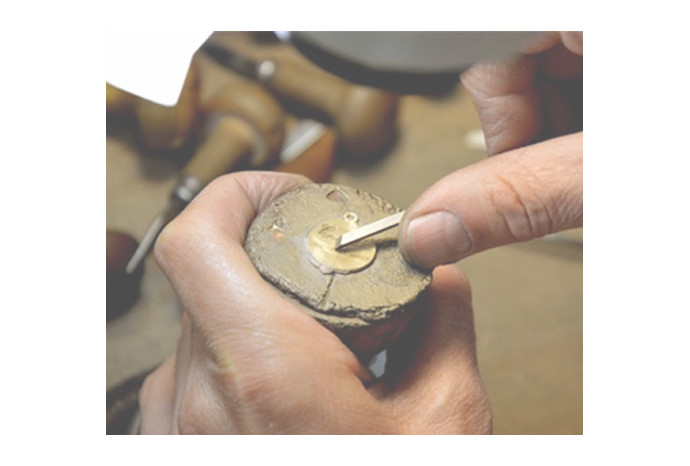 The apparition of glyptic, around the 18th century B.C.(1), or more specifically of Mesopotamian stamps and cylindrical seals engraved  with a kind of spool (2)in hard fine grain stone, gave way to coin engraving while the development of commercial trade called for and eventually imposed the use of currency.

First in Asia Minor, then quickly spreading to the whole Mediterranean region which made up the Hellenistic world during the 6th century B.C., Greek coin making reached its most apex of its production of Antiquity. Being in essence a trading device, monetary samples thus became, from birth, works of art.

Coins were obtained through to a hammering process (3), but unfortunately, we know very little about the technical means, obviously rudimentary, which the artists used to make their coins. Nevertheless, we can suppose that, aside from the spool mentioned earlier, some cutting tools similar to our chisel were already used.

Still we owe to the Greek genius the still unmatched premises of numismatic art. However, medal making remained unknown throughout Antiquity and the Middle-Ages.

We had to wait for the 15th century before a particularly inspired Tuscan artist, called Vittorio Pisano, better known as Pisanello, by no means an engraver, let alone a sculptor, but up to then a painter and mostly a fresco painter, created an amazing piece which took the shape of a small scale circular low relief, first moulded in wax, then cast (4) in Bronze.

Of bold and skilful making, and bearing a rich and spiritual originality, these master pieces, the ripe fruit of the Renaissance, already withheld all the particularities of the art of medals, in the way the face and reverse complement each other, converse with one another.

In the manner of Pisanello’s works, the cast and carved medallions by Germain Pilon and Guillaume Dupré are considered, owing to the splendour and quality of the portraits, amongst the most prestigious wonders of the French Renaissance; and more recently the great medallions by the talented David d’Angers, and the spiritual sketch-like portraits by Alexandre Charpentier.

However, unlike Italy for example, cast medals will remain an exception in France, where pressed medals will continue to prevail.

Regarding numismatic technique and history, we discern three great periods:

-      The Coin pressing, finally, characterized since about 1830 to today by a steady increase in productivity.

Wishing to regulate and improve manufacturing, Henri II implemented the mechanization of the press by ordering in 1551, the import from Augsburg in Germany, and the fitting in all the royal workshops with a new set of equipment mostly made of rolling mills (in order to keep the width of the blades constant), of cleavers (to cut the moulds), and most of all, of a pendulum (5) of which the effectiveness lied in the striking power of a screw.

Quickly implemented, these devices allowed the pressing of perfectly round coins and medals, all exactly identical.

In the meantime, it was soon possible to engrave in hollow, or to obtain an embossed inscription on the rim, thanks to the invention of the broken fellule (6).

We probably owe mostly to the prevailing in France of the pressed medals, mentioned earlier, the survival of the practise of direct carving until today.

However, the emergence during the second half of the 19th century of a mechanical engraving process used in the creation of models and original equipment, opened the way forward to the new numismatic age, the age of medals moulded for pressing. Conceived according to a process similar to the pantograph, this machine called “tour à réduire” (shrinking mill) (7), actually allows craftsmen, first of all sculptors, to reach the finalised monetary model or medal thanks to a scale model, a process which had up to then remained the exclusive privilege  of steel engravers.

Usually, the engraving is then perfected with the use of chisels and cleavers, sometimes even files, scrapers and polishing stones. But the level of completion of a medal engraving depends on the engraver’s tastes and sense of aesthetic. Anyhow, it’s his skill and assurance, and the combined effects of the different tools, which will convey grace and freshness of execution to his work in a variety of sizes.

In the case of relief engraving, the engraver works on the positive version.

The bradawl first hardened by thermal process (quenching), can then be pushed into a steel block; the template needed to press a medal or coin is thereby obtained.

It should be noted that thanks to these techniques and to the pressing of a bradawl in a corner where, as opposed to the of a bradawl imprinted by casting, the engraver can, if he thinks it necessary in order to bring his work to completion, work in turn in hollow or relief as many times as he wishes.

Even though partly a business company, the “Administration des Monnaies et Medailles” (Medals and coins administration) is no less keen on promoting the artistic creativity through active patronage, that no other but the state would have the power to deliver in the current economic context.

You simply have to consult the catalogues where the names and works of more than five hundred engravers and medal makers are listed, and consider the large number of exhibitions held in their walls, one of the lasts (but not least) having been devoted to “Contemporary French art trades” under the patronage of the S.E.M.A., to notice how brilliantly the Monnaie fills this position nowadays, thanks to the impulse of various leaderships, open to all kinds of aesthetic tendencies and individual personalities, and driven by the common desire to keep the art of medal making alive and well.

1)   Previously applied to the art of engraving only, this word is now only used to speak of fine grain stones.

2)   A small mill of which the rotating motion is driven by a pedal activating a tool called bouterolle, which is made of an iron or copper shaft, fitted at one extremity with a bulge which once dipped in an oil mixed with diamond powder or emery, can file the material used by the artist for engraving.

3)   The piece of metal which was destined to receive the imprint of the engravings was placed between two corners carved in hollow, called pile and trousseau. The Pile was secured in a wooden block and the trousseau, left loose but firmly held by the coin maker, was hammered by the other, until the desired effect had been reached.

In order to make the hammering easier, the metal piece could be carved in a lens shape beforehand, strongly heated or moulded

4)   On the subject of medals, the casting process called “au sable” (with sand) or its more recent derivatives are the most commonly used. The mould made to contain the melted metal is made up of the combination of two imprints obtained by piling and packing over a modal usually made of plaster, an extremely fine kind of sand which eventually takes on the consistence of sandstone. This manufacturing technique usually implies that there will only be a limited number of editions.

5)   The first type of pendulum, which had long been driven manually, will only give way in 1840 to the so called friction pendulum, of which the rotating motion was activated by steam energy, and then electrically. A few copies of these can still be found in use at the Monnaie de Paris. The motor screw electro pneumatic press and the screw hydraulic press are its latest developments. As opposed to the pressing of coins which must be obtained in one hit only, the pressing of a medal requires several courses, due to the sharpness of the relief. Between two pressings, the metal, moulded by the pressing, has to be fired again. The completed medal is usually given a patina. It can also be gilded or silver-plated by electrolysis.

6)   Is called fellule the ring used to hold the metal piece as it is pressed, and give the medal or coin its perfectly round shape. When “simple”, that is all in one solid piece, it is used to obtain a smooth rim, or fluted with transversal grooves. When “broken”, nowadays done automatically, it is made up of two or more often three engraved segments held together by a crown.

7)   After the artist has created his plaster model, ideally three times as big as the medal to press, copies are made of it either in metal by galvanoplasty or in cast bronze, called “de cloche” (bell-like); or, as nowadays, in hard resin. All will be used to obtain, depending whether the motif is in hollow or relief, either a bradawl, or directly a pressing mould. When there is a bradawl, it will have to be pressed into a steel block, after having been thermally hardened, which will become the pressing mould needed for the manufacturing.

8)   One cannot forget to mention here particularly the exceptional action of Pierre Dehaye, director of the Monnaies et Médailles, from 1963 to 1984, founder of the French Medal Club, elected member of the “Academie des Beaux Arts” in 1975