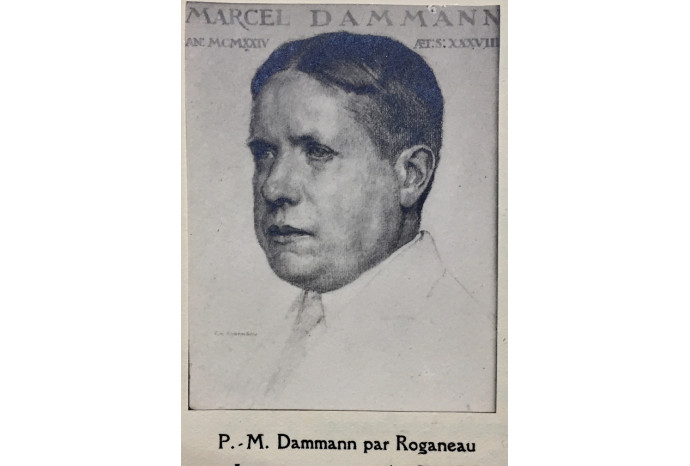 Although he won first prize in Rome in 1908 at the age of twenty-three, it was only after the war that Paul-Marcel DAMMANN started producing continuously and prolifically.

As a pupil of Chaplain, he was under his influence. His first portraits and studies of faces are addressed with the desire to follow scrupulously the thought and teachings of his master; same majesty in the figure, same purity of the line.

When he arranges a composition if his own, he is thinking of Roty. Most of the time, the relief is subdued, and whether representing a landscape or any other motif taken from real life, he tries to fill the background of the medal and observes detail. On the reverse side of the Maréchal Pétain portrait, he does not hesitate to represent a group of marching soldiers, carrying riffles. If nothing is unnecessary, nothing is left wanting either.

The works of P.-M. Dammann produced immediately after the war are made in this manner. Let us leave out the years between 1914 and 1918 which were for him, as for many others, totally fruitless.

In three or four years, a very short period, the artist has evolved significantly and happily. Today his art bears a whole new aspect, and his conception also, is no longer the same. Firstly, the relief is sharper, letters and captions tend to be less numerous and take up less space; secondary and decorative motifs disappear, and the idea is only embodied by one or two figures which neatly stand out from an often bare and smooth background.

When P.-M. Dammann sets the principle that "a medal must be clear and immediately comprehensible", he gives us through his works a wonderful demonstrations of this saying.

He almost worships the human figure; it can indeed be found in all his medals. Without denying or disregarding nature or reality, he no longer captures them in all their precision as he used to, but interprets them according to his tastes, and to the great lesson of the Greeks whom he loves and admires.

Greek art is to him the culmination which has never been exceeded, nor matched in any other period of history. He voluntarily and openly draws inspiration from them.

If most artist who think and act in this way, quickly fall into formalism and repeat themselves in cold imitation, Dammann on the contrary was able to become original; his works shimmer with grace and virility.

However, his stated admiration for the Greeks does not prevent him from appreciating the great renaissance artists, and some modern ones. He still has for Chaplin his initiator, the regard given to men of great worth. He values Ponscarme’s mastery, and Charpentier’s realism. This goes to show his great freedom of judgement and impartiality.

Were it possible to attempt here a literary comparison, we could readily say that Dammann’s style could be related to Anatole France’s. In both can be found the same qualities of order, logic, expressed in the same straightforward, accurate manner.

Very happy with himself (and righteously so), he by no means wants to put an end to his development, and, although he has reached many milestones, he still has the firm intention of going yet further on. Without trying to forecast his future evolution, we can nevertheless await him with trust and goodwill.

Paul Marcel Dammann got the Medal of Honour at the 1928 "Salon des Artistes".